If gene structure information shall be plotted onto phylogenetic trees, GenePainter also requires either:

For the analysis, GenePainter needs gene structure information for each gene. This information must be stored either in the YAML format as generated by WebScipio or in GFF v.3 format. Moreover, all gene structures must be located in the same directory.

GFF3 formatted gene structures are parsed for "CDS" features. All "CDS" features are considered, which are linked via the attribute column (parent tag) to the first "mRNA" feature specified. If no mRNA feature is given in the GFF file, all CDS features are parsed. GenePainter uses column 1 (seqid), columns 4 and 5 (start and end of feature) and column 8 (phase). All other features and columns are ignored. GFF files generated by WebScipio can also be used as input, although they do not strictly follow GFF3 conventions.

The most convenient way to obtain YAML formatted files is to use the WebScipio web interface for gene reconstruction and to download the resulting YAML files. For automation of the YAML generation, several scriptable alternatives exist. First, WebScipio can be accessed by its web service API. This can be done within any software program. In the GenePainter package, scripts are included for querying WebScipio with genes belonging to a single species ( generate_yaml_for_species.rb ) or with genes belong to different species ( generate_yaml_for_multiple_species.rb ). Both scripts access WebScipio through the web service and store the resulting YAML files locally. A brief introduction to the usage of the web service can be found at the WebScipio homepage. Second, Scipio can be used locally, which requires further software (BLAT, Bioperl, YAML Perl module) and respective genome assembly files.

A list of all species available can be found at http://www.webscipio.org/webscipio/genome_list.

YAML files will be named like the corresponding fasta headers. YAMLs are only generated for those sequences, for which a species is specified.

Scipio and WebScipio store gene structure information in YAML format. This format comprises a collection of key – value pairs, an associative array. However, the accurate gene structure representation requires more keys than necessary for the alignment of the gene structures. Thus, GenePainter ignores some data included in the YAML files. Accordingly, these additional keys need not be included in manually reconstructed YAML files. A minimal working example YAML file is defined in Figure 1. An exhaustive description of all keys used by WebScipio can be found at the WebScipio homepage http://www.webscipio.org/help/scipio#description. 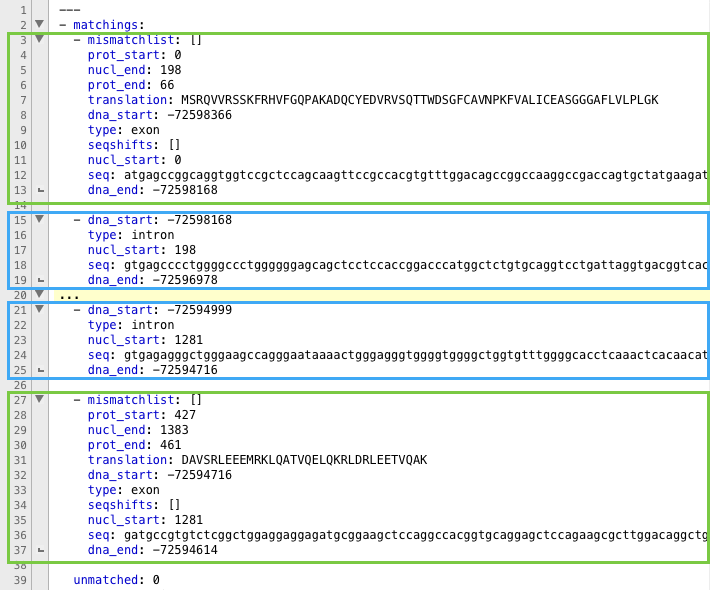 Figure 1 Excerpt from the YAML file describing HsCoro1A. All exon and intron descriptions but the very first and last ones have been omitted (marked in yellow). Blank lines were added to separate exon and intron descriptions. Additionally, green boxes highlight exons and blue boxes highlight introns. Only those key – value pairs, which are relevant for GenePainter are shown. The original YAML file is part of the test data included in the package.

The list of exons and introns ("matchings") must start with the keyword - matchings:. The order of keys describing the exons and introns is not important. Mandatory keys for successful incorporation in GenePainter are listed in the following tables:

Only protein/gene sequence names that are linked to species names are considered for taxonomic computations or generation of YAML files, respectively. All other genes are omitted from these computations. Species names must match NCBI taxonomy, if YAML files are obtained via WebScipio and if the NCBI taxonomy tree is used for intron gain and loss plotting. The file containing the mapping of fasta headers and species names must be in a specific format (Figure 2): Only one species name per line. Gene and species names are separated by ":". If several genes correlate to the same species, their fasta headers might be given in one line. The list of fasta headers needs to be comma-separated or semicolon-separated . The species name must be enclosed by double quotes. Blanks immediately before and after ";" are permitted, and will be ignored by the program.

To map intron gain and loss events onto phylogenetic trees, GenePainter needs to correlate the protein sequence/gene structure names and the species names as present in the NCBI taxonomy database or the user-provided list.
GenePainter can extract the taxonomic lineages from the NCBI taxonomy database dump, which can be obtained using the script download_taxdump.rb, or from a user-provided text-file containing taxonomic lineages (Figure 3). In this file, one lineage should be given per line. Taxa should be ordered from root to species and be separated from each other by semicolons. Optionally, a blank may follow the semicolon.

Figure 3 Excerpt of file providing a user-defined taxonomic lineage. For displaying purpose, parts of the lineage were omitted.